This first set was a project which seemed to be doomed from the outset.  My father was commissioned to paint a set of four stamps for the Falkland Islands in the early 1980s.  He and I travelled to the British Antarctic Survey in Cambridge, to do a little research on the subject matter, which was to be Antarctic Crustacea.  Dad was rather disappointed by the fact that most of these miniscule creatures, (other than the krill), were all rather shapeless and came in varying shades of brown or grey!  He was desperately trying to make them look as attractive as he could, by making the backgrounds more interesting, and did a pretty good job of this.  These are the rough paintings he submitted for approval.

They were duly posted off to the Falklands ... and about a month later, war broke out.  I remember him glumly pronouncing that it was very likely that the paintings had been lost among the crisis on the conflict and would probably never be seen again.  However, he was wrong, and a few years later, they were duly printed and circulated. 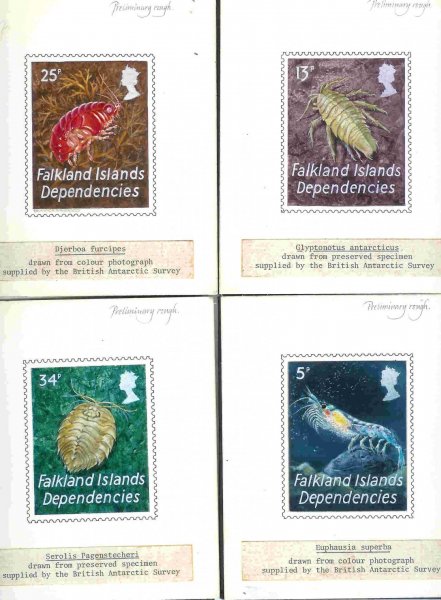 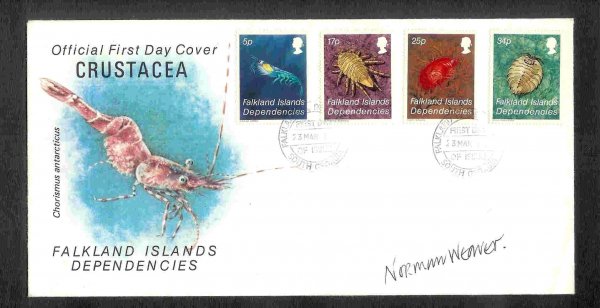 I have also found the following technical details, in the envelope with the artwork: 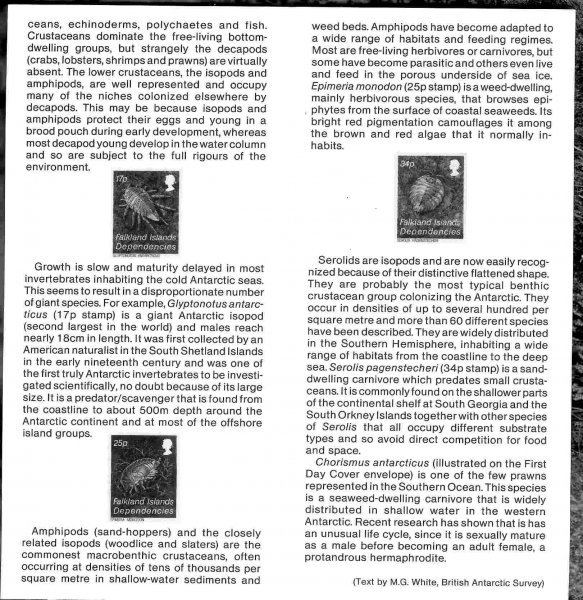 Another commission was to paint a series of four fish to be used for postage stamps in the Grenadines of St. Vincent.  The prospect of this job pleased my father more than the last one, as there were plenty of colourful specimens to choose from, and he duly submitted his paintings of a Cobia, a Tarpon, a Bar Jack and a Blue Marlin.

As usually happened, all went quiet for a while, until he received in the post a set of the completed stamps, which were by then in circulation.  I won't repeat here the expletive he uttered when he discovered that someone had seen fit to add to the paintings what he described as "go faster lines"... I'm not sure whether these will show up on the following photographs, but they were not part of the original illustrations! 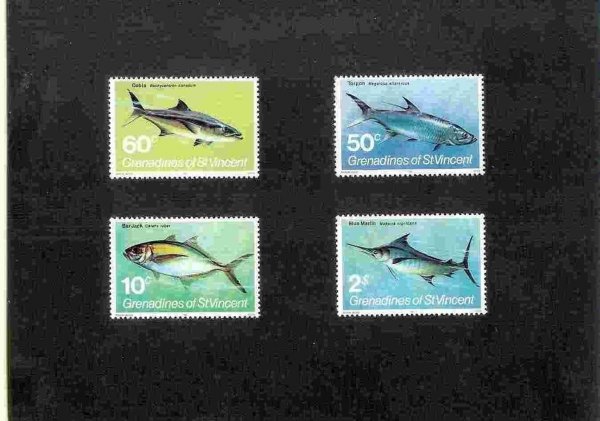 The following set of stamps was produced to commemorate the Trinidad and Tobago World Food Day in 1983.  The picture below is of the finished set of four stamps, followed by the preliminary rough paintings of three of the designs: 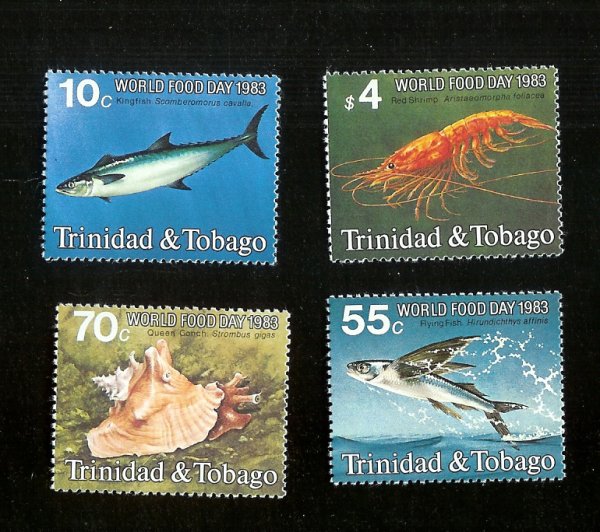 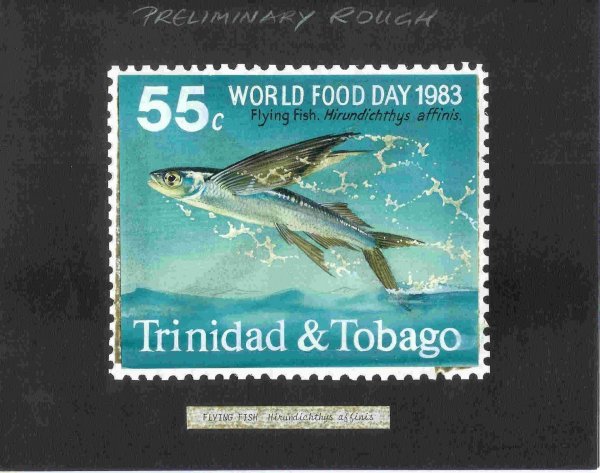 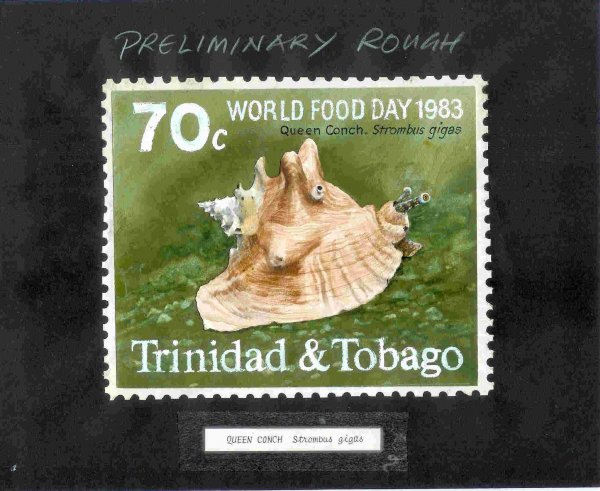 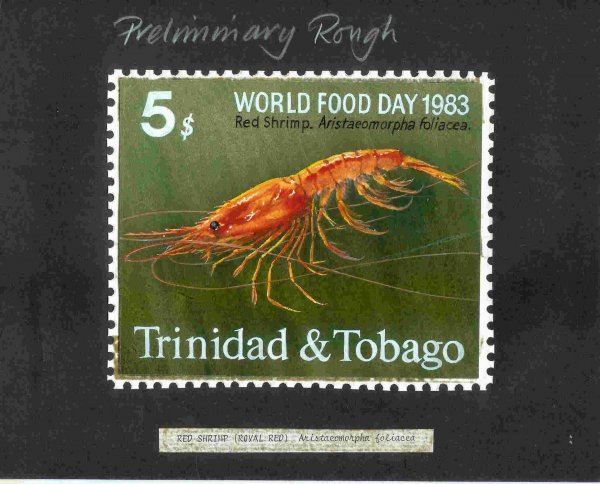 Finally came the request that my father had always rather hoped for - the opportunity to submit some paintings to be used by the Royal Mail.  These were to depict native fish.  Although his paintings for the stamps themselves (preliminary designs shown below) were not selected, he was asked by Crown Agents to produce first day covers for the set, which were printed onto silk.  I had several signed copies of these, and recently discovered the original artwork for sale on the Internet.  I bought these, and have now framed them alongside the silk first day covers. 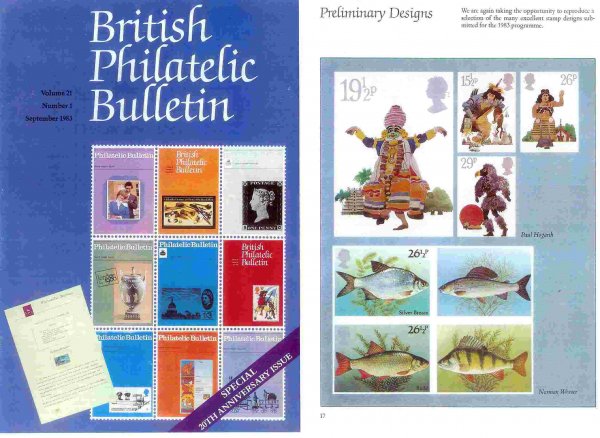 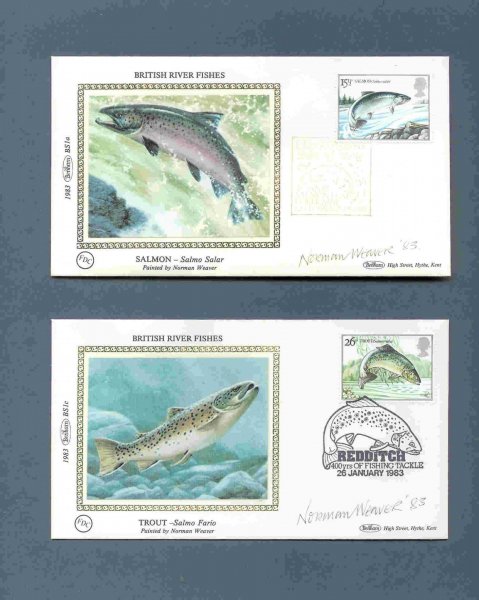 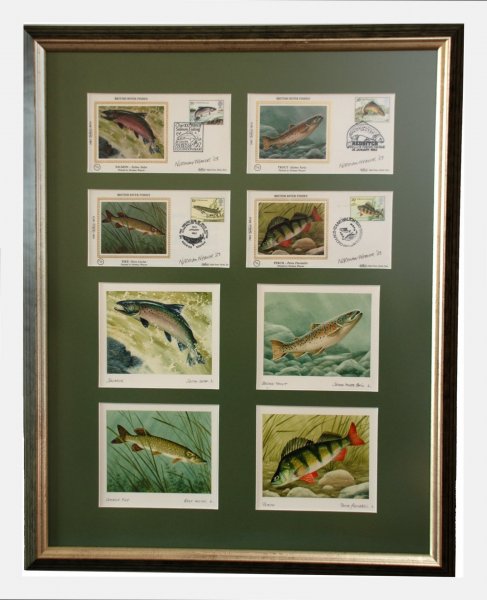 This photo below shows the original artwork, which I have framed together with the covers:
web site by island webservices